japan can be youth's most cooperative nation in 2019 as its people are very free to choose how to design their futures without any interference from the big banking economists who have for decades ruined youth;s happiest opportunities

- its amazing seeing 24 hours a day of content mainly on ordinary people building community things like slow food , ecotourism- japan actually has too few youth and is inviting smart youth exchanges - something it has long done with youth most serious about development challenges -


My fathers work at The Economist from 1962 onwards in case of Japan earned The Emperor's Order of the Rising Sun . My father also wrote at least one of Prince Charles Speeches for a Japan tour. Over 40 years of my own research as an MA in statistics convinces me royal families can now create positive space for climate and other challenges that politicians and  pessimistic media cannot

According to my father timelines  (started at same time that Gordon More published his exponential rising law) 2020s was always going to be sustainability's make or break decade as more tech brains than human ones started to linkin every place and every innovation for better or worse.

At least while Trump reigns, rew places can linkin better sustainability/community futures for all under 30s especially women than Japan

EconomistDiary.com I see 5 opportunities unique to Japan in the next 18 months climaxing with the olympics
the other four are:
G20
pope francis and faith visits
emperor and royal family futures
the technology networks of Masa-Son

i welcome any joint research linked to above chris.macrae@yahoo.co.uk

I try and connect student clubs to maximise friendship exchanges. Friends and I have been doing this one day a week since my father died in 2010. Several Japanese embassies in Asia have hosted events which helped connect technologists, youth and sustainability goals

here's where we got to in sept 2016 at UN (courtesy of bloggers at economistuniversity.com )
can japan please move forward with those it agrees with from this session
f the world of education isnt transformed beyond the over-examined classroom - half of all youth will be

Scotland's most loyal people-centric economist , Gordon Brown, has now assembled 30 national leaders and counting invite families and youth to change the world of education and media - why change if we keep old education half of all youth will be underemployed- lets unite the greatest #learninggeneration - thanks to these leaders
justin van fleet
Commission - most exciting report on education to be issued UN NY 18 Sept
Coursera - Education

Posted by chris macrae at 5:29 AM No comments:

japan has one of lowest rates of death per case

Nishimura Yasutoshi, the minister overseeing the government’s response to covid-19, carries a device that monitors carbon dioxide to measure the quality of ventilation during his meetings. (The room where he and your correspondent meet registers 506 parts per million, safely below the threshold of 1000 ppm that indicates poor air flow. The interview takes place across a large table, behind plastic shields and with face masks on.)

Researchers deployed Fugaku, the world’s fastest supercomputer, to model different situations. Crowded subways pose little risk, if windows are open and passengers wear masks, Mr Nishimura insists. Sitting diagonally, rather than directly across from each other can reduce the risk of infection by 75%. Movie theatres are safe, “even if viewers are eating popcorn and hot dogs”, Mr Nishimura says. While most cinemas in the West are closed, “Demon Slayer”, a new animeflick, has been playing to full houses in Japan, becoming the country’s second-highest grossing film ever. In addition to the 3Cs, the Japanese government warns of five more specific dangers: dinner parties with booze; drinking and eating in groups of more than four; talking without masks at close quarters; living in dormitories and other small shared spaces; and using changing or break rooms.

Posted by chris macrae at 2:16 PM No comments:

Yukio Okamoto, a Japanese diplomat and fellow at MIT, died from Covid-19 on April 24 at the age of 74. The former special advisor to two prime ministers of Japan joined the Center for International Studies (CIS) in 2012 as a Robert E. Wilhelm fellow and served as a distinguished research fellow at CIS until his death.

“Yukio brought to MIT an unparalleled set of experiences on the world stage. A great loss of a great man — and friend of us all,” said Richard Samuels, Ford International Professor of Political Science and director of CIS.

Samuels said in an interview with Japan's media outlet NHK that Okamoto never stopped working vigorously for better understanding between the United States and Japan, and that he has never known anyone to be more committed to maintaining healthy bilateral relations than Okamoto was.

From 1968 to 1991, Okamoto was a career diplomat in Japan's Ministry of Foreign Affairs. His overseas postings included stints in Paris at the Organisation for Economic Co-operation and Development and in the embassies in Cairo, Egypt, and Washington. He retired from the ministry in 1991 and established Okamoto Associates, a political and economic consultancy.

Okamoto was an adjunct professor of international relations at Ritsumeikan University as well as Tohoku University. He sat on the boards of directors of several multinational companies. He also served as the president of Shingen'eki Net, a nonprofit group for active seniors with 16,000 members. In addition, Okamoto wrote books on Japanese diplomacy and government and was a regular contributor to major newspapers and magazines. He was a well-known public speaker and a frequent guest on public affairs and news broadcasts.

While at MIT, Okamoto was an informal mentor to graduate students and a highly valued colleague to faculty and research staff. He worked with a study group from MIT and Harvard University to produce most of the text for a forthcoming memoir. The Center for International Studies will continue to work with his family and colleagues to bring this to fruition.

Okamoto also, during his MIT tenure, gave dozens of public presentations around the United States on topics related to U.S.-Japan relations and to Asian international relations. He did all this while working vigorously behind the scenes to repair Japan’s relationship with China and to help those in need in northeastern Japan after the triple catastrophes of March 2011 — the earthquake, tsunami, and nuclear meltdown. He also founded the Signal of Hope Fund, an initiative he established to assist the Tohoku fisheries industry recover from these disasters. 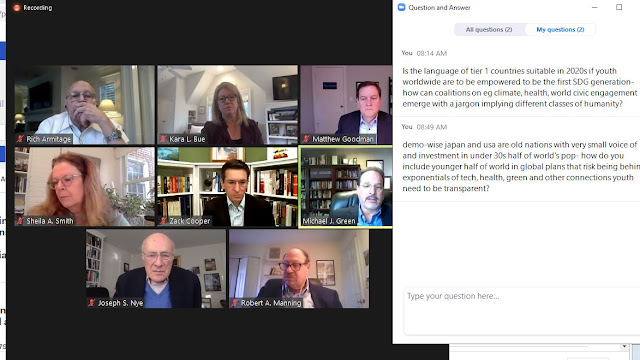 Posted by chris macrae at 6:39 AM No comments:

chris macrae
blog on how will your life change world with global communications youtube washington dc 1 301 881 1655 email chris.macrae@yahoo.co.uk linkedin 9500 skype chrismacraedc home of the 64 trillion dollar colaboration map , of the 7 curriculum millions of youth most need at free online university to sustain net generation's next 3 billion jobs and end poverty goals - a project of Norman Macrae Foundation- The Economist's Pro-Youth Economist and faciliator of net generation's Entrepreneurial Revolution dialogues since 1972